The table below provides details of the movement in average investment returns from various asset classes for the period up to 31 March 2020.

Past performance is not a reliable indicator of future performance. The Global Listed property reference index changed to FTSE EPRA/NAREIT Developed Rental NR Index (AUD Hedged) as of August 2019

The full effect of the impact of Covid-19 isolation measures taken in Australia, the UK, Europe and the US became apparent. The US Weekly Jobless claims reported that 6.65 million Americans filed for benefits taking the two week total to just under 10 million, exceeding the circa 9 million claims made through the entire GFC period and goes to highlight the dramatic effect that the shutdowns and isolation measure have taken on business activity. 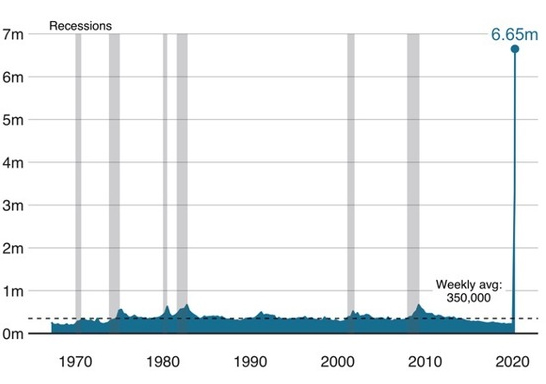 In Australia we know that the Centrelink queues saw hundreds of thousands of people trying to put in claims for unemployment benefits as many retailers shut stores and the government banned a range of activities involving mass gathering of people from sporting events to beauty salons.

Isolation measures in Australian have resulted in the demand for goods and services generally plummeting and a range of businesses shutting down despite their ability to remain open.

Many expect that much of the world will have sharply descended into recession with economic activity having shrunk dramatically. The outlook remains very dependant on the isolation and stay at home measures that are in place domestically and internationally. Also important is the recovery in activity and the response from citizens and businesses once the isolation measures are relaxed. Officials indicate that the measures will be in place for some time yet and thus likely to impact second quarter GDP numbers.

It is becoming apparent that Australian infection rates have or are close to their peak. Therefore, it becomes a matter of time before we are able to relax the isolation measures. In the US and elsewhere the peak seems to be up to a few weeks away. China's peak infection rate was seen some time ago and only now are Wuhan’s restrictions being relaxed.

Cumulative number of known cases since the 100th case 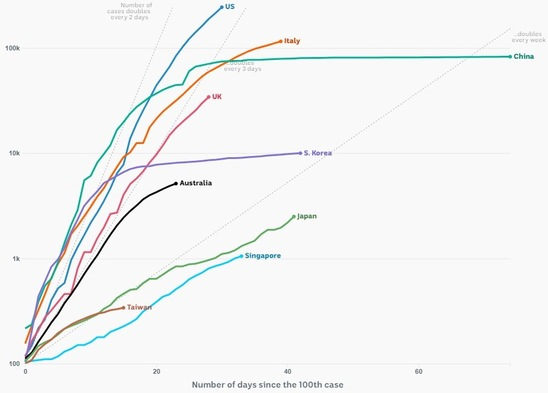 The outlook for second quarter economic activity is likely to be weak with corporate earnings likely to be poor. However, the massive economic stimulus from governments in some instances heading close to 20% of GDP, and at over $200 billion in Australia or over 10% of GDP and US$2 trillion in the US, the response has also been unlike any seen before. The fiscal response is also greater than what was seen in the GFC for many countries and is in addition to the central bank moves to cut rates to or near zero and put quantitative easing measures in place to combat the liquidity issues that have been experienced.

The Australian share market (-20.7%) fell sharply with a peak to the trough (thus far) of -36.5%. This was accompanied by volatility which surpassed the levels seen in the GFC.

All sectors saw declines with consumer staples (-3.6%) least affected as panic buying took hold. Other defensive sectors such as health care (-5.4%) and utilities (-6.2%) were the better performers for the month. With the break down of the OPEC agreement with Russia, the excess supply in conjunction with the precipitous fall in demand saw energy (-37.5%) as the worst performing sector. Financials (-27.6%) and consumer discretionary (-25.9%) were also hit hard with concerns around defaults and the lack of consumer demand for anything but essential items.

Emerging markets (-10.9%) also benefitted from currency movements and outperformed developed market shares. China (-5.2%) was a driver of emerging market outperformance despite being the origin of the virus and first hit and has benefited from beginning to resume activity. 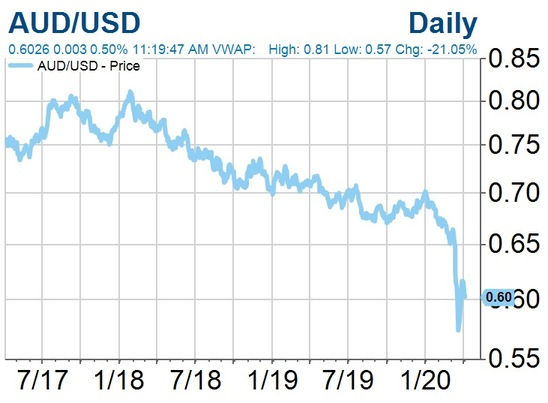 Bond yields were a bit erratic through the month as can be seen in the chart below. Despite this the US 10-year government bond yield fell over 49 basis points to 0.668% while in Australia the government 10-year yield fell 2 basis points to 0.827%. With rates so low it continues to be challenging for very conservative investors to generate returns and increasing exposure to growth assets is now much less risk than prior to the market downturn. 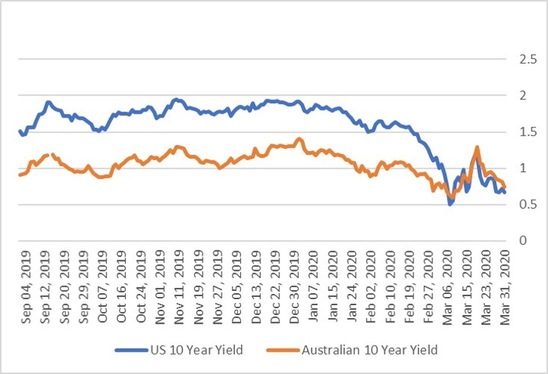 Issues around liquidity led to the widening of bid/ask spreads in some fixed interest markets. This in part was the basis for the erratic behaviour of bond yields. While this has improved more recently, it may be more costly when trading the defensive components of the portfolio.